The roars of laughter and cheer can be heard throughout the Silver Spurs Arena with each rider dismounting off a bull, but there is quite a different sound you’ll hear on the Silver Spurs Ranch down in Kenansville. It’s quieter, apart from the rumbling of a tractor across the field, the wind, and the occasional grunt from the animals themselves. And when you pull up to the ranch, you’re struck by the beauty of the land and the stock. While they may look beautiful or “cute”, these bulls are far from any petting zoo animals you’ve ever seen before.

While the “baddest and rankest bull” in rodeo title still goes to Bodacious, a whopping 1,700 lb four-year-old Charbray, the Silver Spurs stock has built quite a reputation for itself in the past couple of years. In 2015, one of the Silver Spurs bulls, Hang ‘Em High, traveled all the way to Las Vegas to compete in the National Finals Rodeo (NFR), again! So it goes without saying that these bulls aren’t trained to be bad. They’re born bad!

In between feedings and a couple of stare downs with the bulls, we were able to catch up with Livestock Co-Chairman Steve Knowles who has been watching over the stock for about ten years now. He and George Kempfer oversee the stock, making sure that not only are they healthy, but that they live up to the reputation they’ve earned. “I take a lot of pride in seeing these bulls born and watching them travel to different rodeos, and some making it all way to the National Finals Rodeo, all within a five-year span.” But like many parents, Steve knows when a bull can perform better than they’re letting on. “If I see some of the bulls not performing to their standards, I won’t hesitate to pull them from performing in the Silver Spurs Rodeo.”

So, just who are these bulls? Well, meet some of the baddest, most dangerous, and “rankest” Silver Spurs stock: No Say I,  Stinky Sanchez, and Fingers. (Trust us. You don’t want to know how he got that name.) 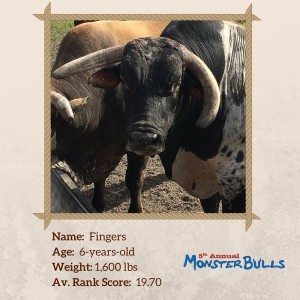 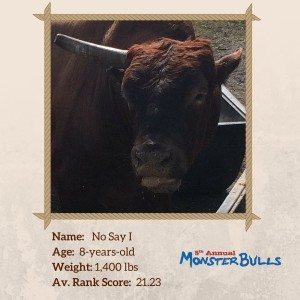 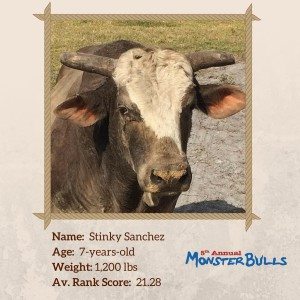 Two of these bulls,  No Say I and Stinky Sanchez, have made it all the way to the NFR in past years. In fact, most bulls that compete in the NFR range from five to seven years old. So it’s safe to say that these bulls are at the height of their prime despite their age! (They can even be found teaching these younger bulls a thing or two.) Now, if there is a bull to watch during Monster Bulls, keep your eye out for Fingers. He is one of the biggest and nastiest bulls this season. Even on the ranch, he doesn’t really play well with the other bulls; spending a lot of time by himself.