The history of tie-down roping: From ranch chore to rodeo event

While bull riding’s beginnings originated from what some would call a dare, many of the modern rodeo events you see today have roots in ranching chores of the early days of the Wild West. Though time and technology have changed the landscape of the U.S. and much the rest of the world, the rodeo world sometimes seems unchanged. Many of the contestants you see in the arena aren’t just professional rodeo competitors – they’re often full- or part-time ranchers. Working their cattle, herding steers, and roping calves are ranch tasks done each and every day. In this blog, we’ll take a look back at one of ranching’s oldest tasks: Tie-down roping, giving you an idea of its purpose, history, and how it plays into rodeos in Florida.

Back in the day, when the west was still undeveloped and new, ranchers didn’t have the amenities of electric fences and modern medicine to combat the new terrain. Mainly relying on their guts, horse, and hopefully a few good friends, ranchers would have to get their hands (and pretty much all of their clothes) dirty to get the job done. One of ranching’s biggest and probably most important chores is making sure that 1) your livestock is healthy and 2) that your cattle doesn’t stray into your neighbors’ herd. To prevent these things from happening, ranchers quickly learned how to rope their cattle to either administer medicine, to breed them, or to brand them with their family’s brand. It would be only a matter of time, practice, and a chance to earn bragging rights before it would lead us to the rodeo event of tie-down roping. 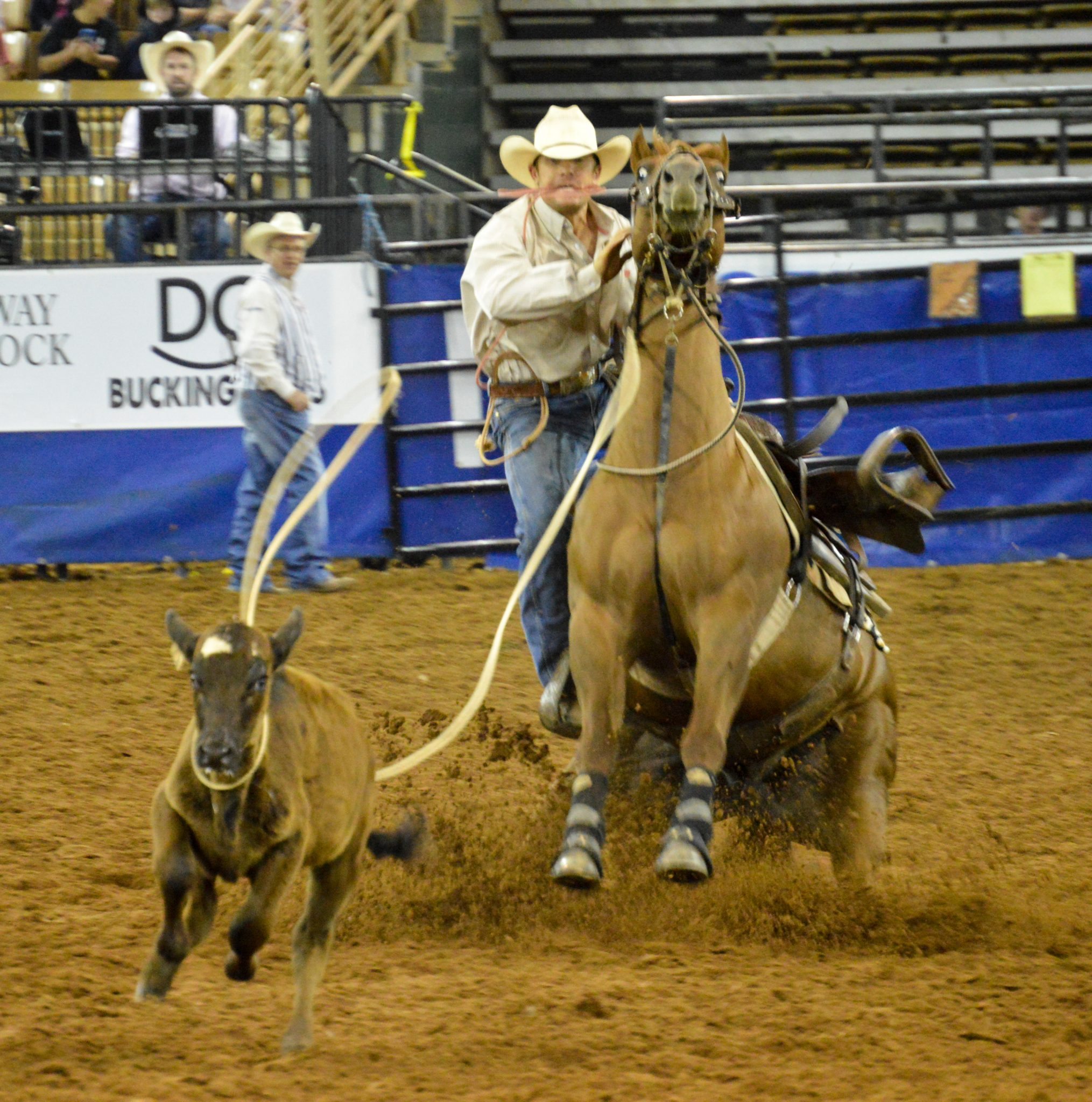 As opposed to the grassy fields of older times, modern tie-down roping often takes place on dirt, as it is safer for the calf, the contestant, and their horse. For rodeos in Florida sanctioned by the Professional Rodeo Cowboys Association (PRCA), calves must weigh between 220 and 280 pounds, and are inspected by PRCA judges and veterinarians before the event to ensure each calf is strong and healthy. After giving the green light to compete (or should we say the “cowboy nod“), the calves are led through chutes to a holding pin until it’s their turn to run. To keep the competition fair, each contestant draws a random calf.

When it’s go time (for contestant and calf), the calf is led through a narrow chute with spring-loaded doors. When the calf is inside, the door is closed behind it and a lightweight rope, attached to a trip lever, is fastened around the calf’s neck. The lever holds a taut barrier that runs across a large box at one side of the calf chute where the horse and contestant are waiting. The barrier is used to ensure that the calf gets a head start. It’s in these moments before the run where the rider’s timing is critical. If he doesn’t get his horse running at the right moment, the calf could run out of reach of his rope. And if he rushes too early and breaks the barrier, he gets 10 seconds added to his time. Which, in all timed rodeo events, can make or break a cowboy or cowgirl walking away with a fat wallet. 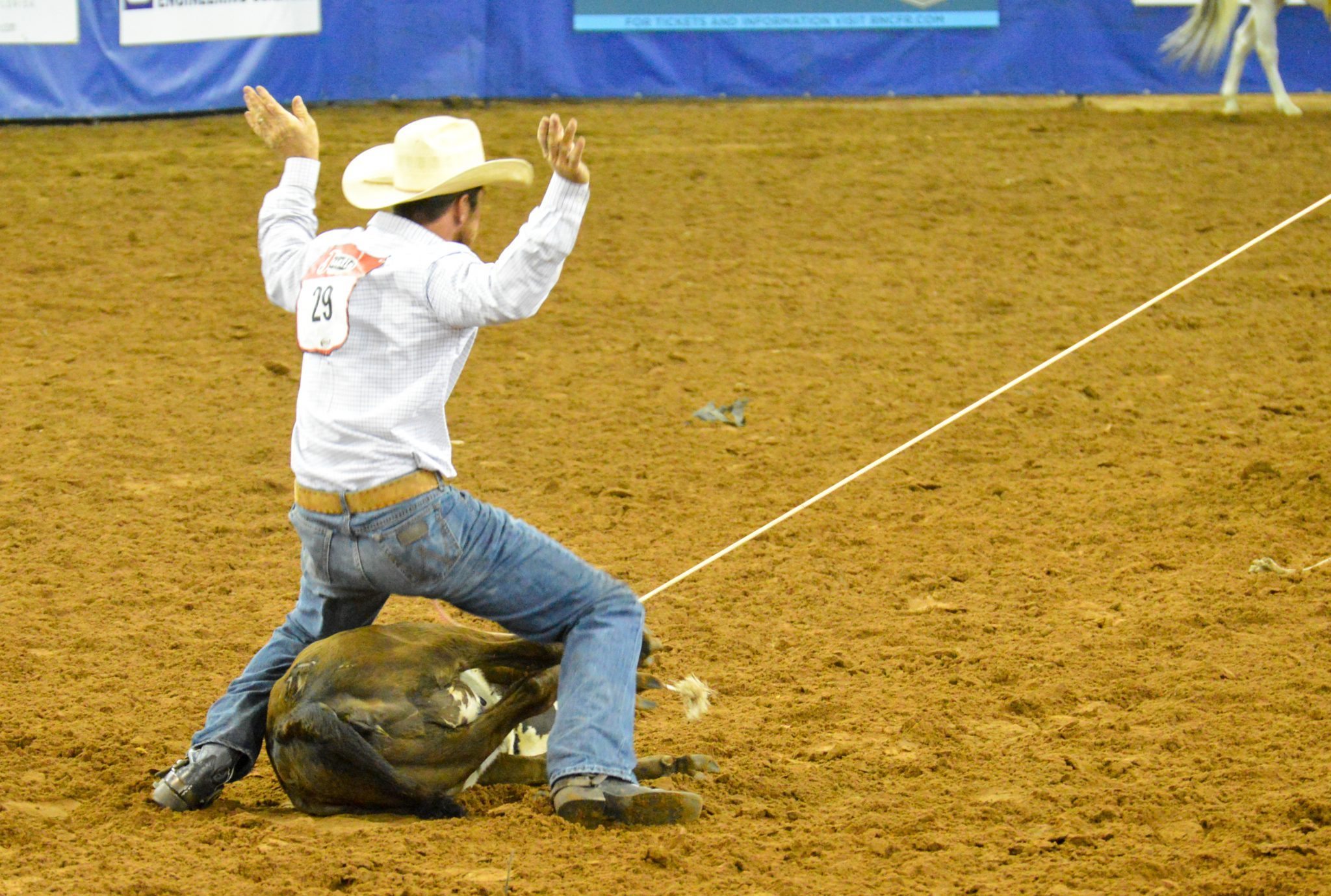 Moving on from the pressure tie-down ropers face each run for a moment, when the rider feels they’re ready to run, they’ll give a nod to the chute operator to open the gate and release the calf. The calf will then run out of the chute in a straight line, pulling the rope off its neck while also releasing the barrier for the horse, starting the clock for the rider and horse to chase and tie down the calf. As the rider chases after the calf, he’ll get close enough to throw his rope (hopefully) around the calf’s neck. After giving a cue to his horse to stop, the rider will dismount off his horse and run toward the calf. Once the rider reaches the calf, he must pick up and flip the calf on its side. Now, with the calf of the ground, the roper ties three of the calf’s legs together with a short rope known as piggin’ string. When the tie is complete, the roper throws his hands in the air to stop the clock and must return to his horse. During this time, the judges wait six seconds to make sure that the calf’s legs remained tied before the animal is released.

Ready to see tie-down roping for yourself? Save the date for February 16th, 17th and 18th when the 140th Silver Spurs Rodeo returns to Kissimmee. Then, you can watch tie-down roping, bull riding, bronc riding and more rodeo action!