More Than 8 Seconds with a PRCA Judge

What’s black and white, is in the middle of all the action, and plays on the dirt during every Silver Spurs Rodeo performance? (Hint: Zebras aren’t rodeo animals!)

Did you guess a PRCA judge? Whether you’ve noticed them or not, these men are right in the midst of the action (even during rough stock events!), ensuring the fairness of each rodeo event. We sat down with Steve Knowles, former Silver Spurs Rodeo Bull Riding champion, former Silver Spurs Big Boss, and current Pro Official, to learn more about what it takes to be a judge! 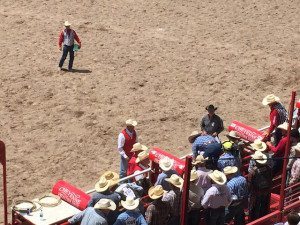 Much like a referee in other sporting events, they can be spotted wearing a uniform – a long-sleeved Wrangler PRCA shirt, a black and white striped vest embroidered with a red PRCA Pro Rodeo logo both on the front and the back, jeans, boots, and a cowboy hat (cowboy musts, in our humble opinion!). Despite what some fans may think, PRCA judging officials do not wear any protective gear. Some may argue they have the toughest job in the sport of rodeo because they have to stay focused and on the dirt during all of a rodeo’s events.

So you might be wonderin’ what it takes to become an official. The process is quite extensive! In order to become an official PRCA judge, you must have been a rodeo competitor for at least five years. Once you meet that requirement, you must attend several seminars, where you have to pass written and field exams. Once you are qualified to be “in the field”, you’ll be given field assignments that must be completed with a mentor in the arena. Typically, once a newly-hired PRCA official has met these qualifications, they will first officiate at smaller rodeos, and eventually move on to larger rodeos.

The PRCA employs 8 full time Pro Officials and about 140 reserve judges.  There is a full time PRCA staff member deemed the “Supervisor of Pro Officials” (kind of cool title, huh?) who oversees all aspects of the judging program, which includes making determinations about who will travel to which rodeo.

Aside from timing, watching for fouls, keeping score, and trying not to get stomped by the stock, one of the most important duties of a PRCA official is to arrive four hours prior to each performance to inspect all of the livestock competing in the events to ensure that they are not sore, sick, lame, or injured. “We would cancel a rodeo event before using unhealthy livestock,” Steve, who has been a PRCA official since 2001, shared with us.

The exciting life of a PRCA rodeo official includes traveling across the country, meeting new people, and an unusual amount of time off. Most full-time officials will work approximately 150 days out of the year. The requirement breaks down to about 25 rodeos or 125 performances to officiate. So Steve, for example, finds himself traveling as far as San Juan Capistrano, California (which also happens to be one of his favorite rodeos, aside from Silver Spurs, of course!).

“We have a lot of fun, as officials – we really love what we do. It’s the thrill of giving away millions of dollars at one time. You’re in charge of who gets it,” said Steve. One of the toughest parts of being a rodeo judge is that while rodeo fans may have their favorite competitors, officials are not allowed to play favorites.  Steve went on to say, “Integrity is everything. If you don’t have high integrity in this business, you do not make it very far.” Though what these officials experience at times is very serious, they also get to experience a few good laughs along the way. When reflecting on all that he’s seen, Steve laughed, “Lots of riders rip their pants, you just better hope they’re wearing drawers!”

Needless to say, being a PRCA judge is adventurous, exhilarating, tough, and rewarding! And on October 3rd, see the best cowboys go up against the best livestock from across the nation and imagine the difficulty the judges face when determining the winners!