The sport was developed by ranchers back in the 1800s. It’s a stylized version of the skills they still use today to control and move livestock.

Many Silver Spurs Club members are from the historic ranching families who founded our club back in 1941. The Spurs (as we’re known around town) puts on the largest rodeo east of the Mississippi every February and is honored to be hosting the Professional Rodeo Cowboy Association’s Wrangler Champions Challenge in less than a week! Our rodeos and indoor arena have been a proving ground for some of the nation’s best cowboys and cowgirls over the years.

We also raise some of the finest rodeo stock in the nation. The animals are bred for competition at our 1,800-acre ranch out in Kenansville. Half of the 100 bulls, horses, broncs, steer, and calves set to hit the arena for the Wrangler Champions Challenge will come straight from the Spurs stockade. The other half are coming in from Texas. All of the stock must be approved by the PRCA.

Competitors ride their own horses in the barrel racing, calf roping, team roping, and steer wrestling (a.k.a. “bulldogging”) events, and we provide the steer and calves. The broncs (a.k.a. untamed horses) and bulls are randomly assigned to competitors in those events. 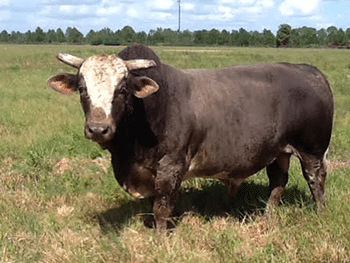 Silver Spurs bulls have a reputation as some of fiercest in the country. Our buddy “Sanchez” – who competed in the National Finals Rodeo in Las Vegas in 2013 – is the one to watch next Saturday night. He’s six years old and weighs 1,200 pounds, which is small for a bull. He’s short, too. But what he lacks in size, he makes up for in muscle. The cowboy who draws him is in for one heckuva ride!

Sanchez is a superb athlete, and just because he’s feared doesn’t mean he lives in fear. In fact, some of the best rodeo bulls are also the most gentle. A bull’s ability to buck and thrash isn’t based on his temperament. It’s based mostly on his breeding and desire to participate. Believe it or not, you can’t really train a bull to buck. He’s either got it in him, or he doesn’t.

Same goes for our horses, a cross-breed of draft horse and quarter horse. We play close attention to genetics for all of our livestock. In fact, some Spurs members work in this field and help with the process! Our herd is descended from a mare we bought in Montana 30 years ago.

“Ned Ross” is the Spurs horse everyone seems to want to ride. It’s only his second year on the circuit, but everyone who has ridden him has won. We hope young Ned’s perfect record remains intact during this weekend’s rodeo events.

Presented by Justin Boots, the Wrangler Champions Challenge brings together the country’s top rodeo all-stars for a thrilling night that’s fun for the whole family. The animals may not be as famous as the cowboys and cowgirls, but they certainly give ‘em a run for their money when it comes to athletic prowess and showmanship. No doubt some of the best performances of the night will come from our four-legged performers!