Year of the Breakaway

History was made in 2019 when the Professional Rodeo Cowboys Association (PRCA) added an event to the timed event portion of the rodeo. If you love calf roping and team roping, you’re sure to love this event, as it is for the women of rodeo! You now can see cowgirls competing not only in barrel racing but also in breakaway roping!

The Silver Spurs Rodeo is thrilled to announce breakaway roping will be making its debut at the 146th Silver Spurs Rodeo on June 4 and 5! We understand familiarizing yourself with a new rodeo event can be rather intimidating. This blog will break down everything you need to know as you cling to the edge of your seat when the first breakaway roper launches from the box here in Kissimmee.

What is Breakaway Roping?

Breakaway roping is an equine sport in which a person horseback ropes a calf around the neck.  Breakaway roping is known to be one of the fastest events in the sport of rodeo. With the fastest recorded breakaway time being 1.59 seconds, there is little to no room for margin of error if you want to come out on top!

How Does Breakaway Roping Work?

In breakaway roping, a calf is moved into the roping chute as the roper enters the box on the right side (heeler’s side) of the roping chute. The cowgirl then backs into the box and waits for the calf to be positioned correctly. A nod of the head from the roper signals that it’s go time! The chute operator opens the gate, and the suddenly freed calf breaks off running into the arena.

The breakaway roper is behind a barrier rope with an easily broken string fastened to the calf. As the calf reaches the end of its rope, it pops off and simultaneously releases the barrier for the roper. Once leaving the box, the roper’s horse runs after the calf from behind, putting the roper in position to rope the calf around the neck. Once the calf is roped, the roper stops her horse, pulling the rope tight and breaking the small string that connects the rope to the saddle horn. When the flag on the end of the rope flies, the clock stops.

What Type of Penalties Can Breakaway Ropers Incur?

The top breakaway ropers have trained with their horse(s) to leave the box at full throttle, through the barrier at the perfect timing, giving them a slight advantage on those who are stationary in the box. This can result in breaking the barrier, but risks need to be taken to become a champion! 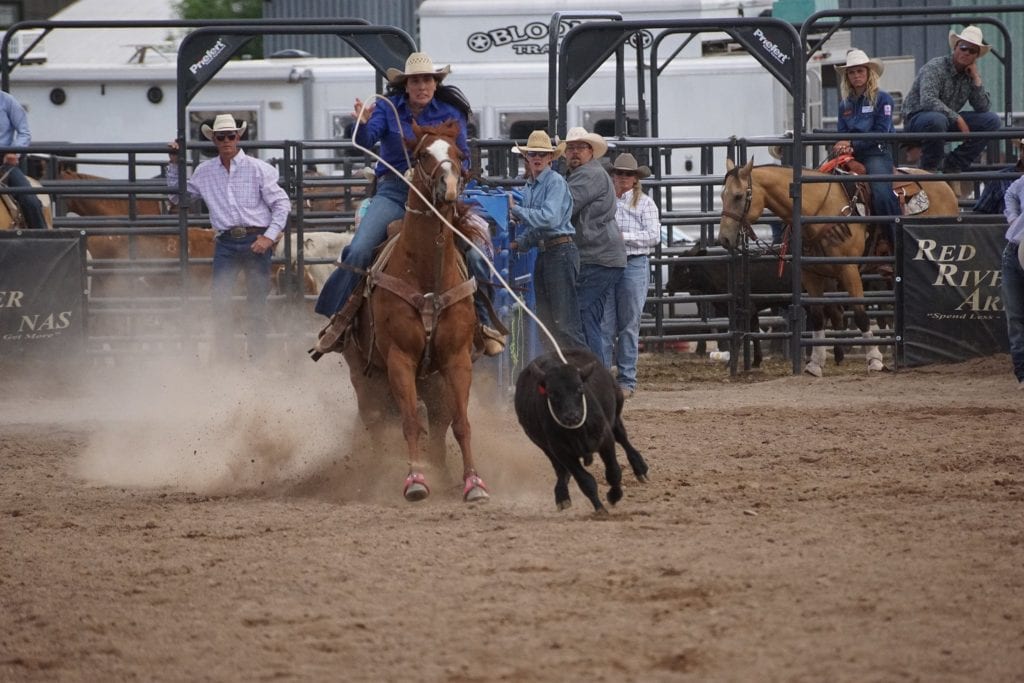 Join us on Friday, June 4, and Saturday, June 5, at the 146th Silver Spurs Rodeo in Kissimmee! By doing so, you’ll help support advances in the sport of rodeo, the women in rodeo, as well as the Heavenly Hooves foundation.

The June Silver Spurs Rodeo benefits Horses for Heroes, sponsored by the nearby Heavenly Hooves therapeutic riding center in Saint Cloud, Florida. Heavenly Hooves is partnered with the McCormick Research Institute and the UCF College of Medicine to provide equine therapy for veterans. The Silver Spurs Riding Club is proud to do its part in supporting those who have selflessly served in the United States armed forces.

History will be made at the 146th Silver Spurs Rodeo this June as the first breakaway roping champion will be crowned here in Kissimmee. Do you have your tickets yet?