The Bull’s Journey: From the Ranch to the Chute

Contestants and spectators aren’t the only ones that embark on journies to rodeos in Florida. From the ranches of several Club members to the Silver Spurs Arena, our bulls have a trek of their own. We’ve covered the hard work and dedication it takes for a contestant to rodeo in the Professional Rodeo Cowboys Association, but what about the roughstock’s story? On the blog, we’ll discuss commonly asked questions about bull riding’s two-thousand-pound bucking athletes.

Where do rodeo bulls come from? 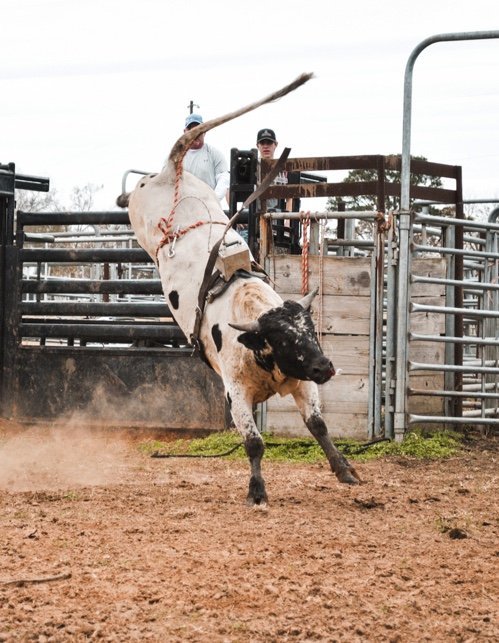 How do you produce the best bucking bull?

Unlike other rodeo events, no particular breed has a reputation for producing good bucking bulls. Genetics play the biggest role in producing rodeo stock. With advances in technology, stock contractors often look for the best rodeo-bred cow and bull to hopefully produce champion livestock.

After a calf is born, stock contractors wait until they are about a year old, known as a yearling bull, before they’re ever bucked. Once of age, they’re bucked about two or three times with a dummy, a weighted device that aids in the training and bucking technique, to see if they have the talent and heart to buck.

After showing potential, the young bulls are given time to mature. At about two years old, the bull is bucked frequently to familiarize them with an arena environment and atmosphere.

How do you train bulls to buck?

Contrary to several myths about these athletes, there is no way to train bulls to buck a certain way, or even at all. A flank strap is loosely tied around the bull’s waist to further assist the notion to buck. Each rodeo bull has its own unique bucking habits, some dart to the left or right, others spin continuously in a circle. After the bull has established its trip, a term that describes each bull’s bucking pattern, they’re ready to make their debut in Florida rodeos! When they’re not performing or traveling, they spend their time at the Silver Spurs Ranch in Kenansville.

Before the first performance, the bulls are hauled from the ranch to the Silver Spurs Arena. Here they are put in the back pens, which are metal pens set up in the back of the rodeo arena until it’s time for them to make their way to the bucking chutes. After traveling through several holding pens they end inside the bucking chute. Once the rider is ready, he nods his head and the bull busts out!

Where do the bulls live when they’re not at the rodeo?

After the ride, the bull is stripped of the bull rope and flank and sent down the pens to the holding area. After the rodeo is over, stock contractors will load their bulls onto the trailer and haul them back to Kenansville, where they’ll rest before the next Silver Spurs Rodeo. Life on the ranch is quite the dream for the Silver Spurs Riding Club’s livestock. They are fed regularly, graze on green grass at their leisure, and are surrounded by other bulls and broncs!

The offseason looks similar to retirement for these athletes. Once bulls are retired from bucking, they are sent back to the ranch to live out their days. Depending on the bull, some contractors will use him as a breed bull for the upcoming season. Retirement can come at any age. As long as the bull still bucks and still wants to perform at rodeos, he will.

The bulls at the Silver Spurs Rodeo live a luxurious lifestyle. Between performing for eight seconds roughly ten times a year to living full time on the ranch, stock contractors ensure they’re treated better than many household pets. Check out our event schedule so you can see the Club’s bucking stock perform at the next Silver Spurs Rodeo!