There are a lot of things people expect when they come to a rodeo. Roaring cheers. Laughter. The buzzer after eight seconds is over and the sigh of relief from the audience knowing that the rider is safe and sound. But there’s another sound you might not have expected that happens at the Silver Spurs Rodeo. Sizzle. For the last 30 years, local legend Ed Partin has been cooking up steaks behind the arena for the stock guys (the helpers behind the chutes during the rodeo). So gather round the grill everybody. We’ve got something to teach ya. 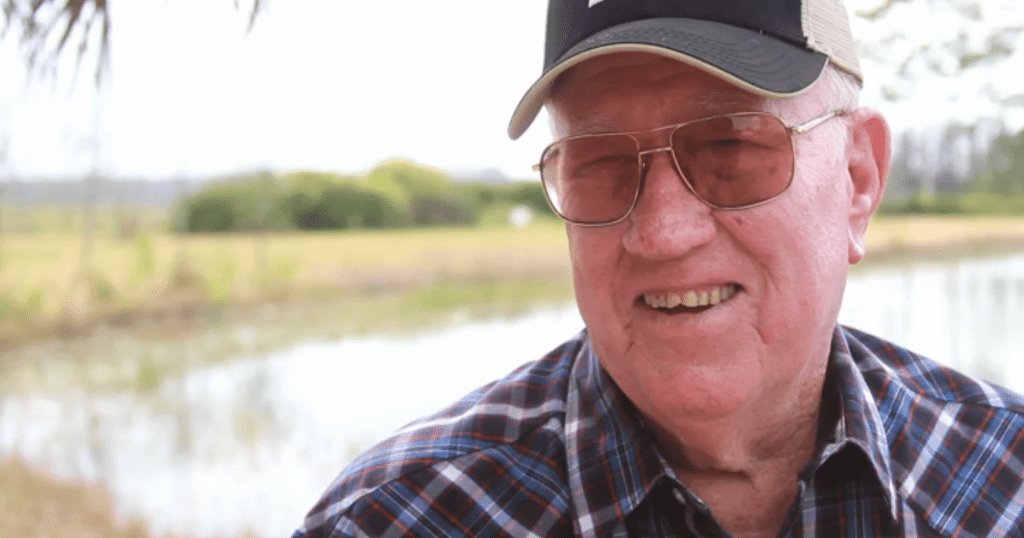 Ed Partin has been a lifelong rancher so he knows a thing or two about beef. His daddy Geech and his grandfather Henry O. Partin were a large part of the cattle heritage that our community knows so well today. Because of that, Ed’s got a pretty important reputation to uphold that heeds generations of cooking. The Grillmaster. And he is going to share his steak secrets with us.

The first thing you do he says? Round up your family. We told Ed we wanted him to just simply cook one steak for us so he could share the recipe with us. He quickly said he’d like to invite some friends and his family because that is part of what he does. It’s just not the same without a group of folks and cooking for one meant we couldn’t try any! And he was right. Everything is better with family and friends.

We were at Ed’s son Trip’s property and when you walk on to the Partin ranch, you’ll hear a whole other set of noises. Birds flying by trees, the breeze, splashes in the water from feeding the fish, jokes and family stories being told, and of course, sizzle.

Everyone started to gather around the table and before we knew it there were 10 or 12 of us. But Ed’s not sweating the crowd because cooking for an army was how he learned. Ed always has an extra plate…or two or three.

“My father loved to entertain people, so I’ve just kept on the tradition. Saturday nights they’d always have a crowd over and he’d barbeque a whole lamb. Steaks weren’t as popular back then because the steaks were pretty tough.” he says.

Ed’s parents had been cooking for Silver Spurs members and various community events as long as anyone can remember and Ed plans on carrying that tradition on for many more years. Unless he decides to gear up his rock band again… yes, he was in a rock band… who played for Gator Growl in 1958. You learn a lot about someone when you spend time with them around a fire.

So we asked him, what is the secret to a good cattleman’s steak?

“A good oak fire and a good quality piece of meat. Keep the seasoning simple like salt, pepper, sometimes a little garlic, but that’s just me.”

So the secret’s out folks. And I think most of us were surprised it was so simple.

They might say the key to a man’s heart is going through his stomach, but Ed uses his heart to feed others. And for Ed, the stock personnel will always hold a special place in his heart, as working with the livestock was one of his favorite memories of the rodeo when he was a young boy. So his steak almost serves as a sentiment to his golden days of working in the rodeo while thanking the countless number of volunteers that participate in the rodeo each year.